As my son and I left the house early this morning the crows were cawing and calling.  I stepped off the porch and looked up to see a single crow perched in the tree across the street. 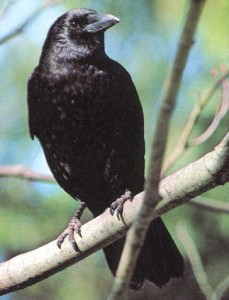 Crow Medicine (magic/wisdom/power) brings opposites together and represents Higher Law–the laws of Nature and the cosmic order–not the laws of humankind.  I’ve walked with Crow for many years now. Hardly a day goes by when he doesn’t bring me a message. I’ll admit, I don’t always want to hear those messages or take them to heart.

My son and I drove over the bridges and through the winding hills to his school.  He was quiet this morning and I asked if everything was alright.

“It’s freezing cold,”  he pouted just as a crow dive-bombed the windshield and escaped   followed by another flying at a safer height above the car.

After dropping him off and stopping in to the post office, I spotted a dead opossum in the road–being picked at by a crow.  Opossum often play dead when attacked rather than using their teeth and claws to defend themselves.  I saw the crow picking at his flesh as a sign that my time for playing dead has come to an end.  Crow feasting on the remains of the opossum felt fortuitous to me.  I worked this out in my thoughts as I drove the rest of the way home.

Stepping out of the car, I heard the crows again.  This time when I looked up there were three trying to chase off a hawk circling above my house.  I smiled.  “Three crows and a hawk!  It’s going to be a great day!”

Hawk represents the ability to rise up above the fray and minutia in order to gain a clear and unobstructed view.  While the mouse runs along the ground and can only see the next thing in front of her, the hawk soars above and sees all.  Both perspectives are valuable and necessary.  I’d spent a lot of time with mouse these past many months.  It was a joy to welcome the hawk back into my world.

I came inside and lit some incense while I prepared for my phone appointment.  The day I’d planned involved a series of small tasks all needing to be completed in rapid succession.  One thing and then the next (mouse).  Instead, as I was tending to assuring my frequent flier miles from a recent trip were properly logged, I found I’d earned a free round-trip flight many months ago and never used it.

The next hours were spent tending an entirely new set of small details while holding the vision of the whole and simultaneously working within the flow of natural law.  The trip I’m planning truly is the end of my days playing opossum and a return to greater vision.

What ecstasies are you embodying today?

"Karina is a kaliedescope of wisdom. She is constantly moving the lens, opening brilliant new ways of seeing. She is a catalyst for personal and cultural transformation." Amy D.

Thanks so much for taking time to connect!

Response time might take up to 48 hours – thank you for your patience!